Let’s look at our examples from above. If you have a job, what do you give up to go to work? There are many possibilities. I could sleep in. If it is a nice day I could take my dog to the park and play all day. Or, I could even spend the day looking for a better job right? I give up all of these things if I choose to go to work. What I get from working is a greater benefit than the cost of giving up these things. But, opportunity cost is the most desirable thing given up not the aggregate of the things we gave up.

Let’s look at the college example. We are all told to go to college so you can get a good education and that will translate into a good job. How do we know that college is such a good thing? How much college do we need? Let’s look at some numbers from a study on education from the Institute of Government and Public Affairs:

There are distinct benefits of a college education. A study conducted by the Institute of Government and Public Affairs for the Illinois Board of Higher Education, showed the following benefits:

“In addition, college can provide many other benefits that are less tangible, and will help your child become a better-rounded individual. Benefits include increased self-awareness, the ability to think critically, and an opportunity to meet many different people. Overall, the entire college experience will provide your child with a lifetime of benefits”.

As we can see there are many benefits to a college education. So what are the costs? There are monetary costs for sure. Also, we will spend four or more years going to classes. We could be working and earning money instead of going to college. Finally we will be giving up free time for study time that could be used to do other things.

What about spending money on a missile defense system? In the fiscal year 2006 budget the taxpayers of Colorado will spend, as a fraction of overall federal spending, $150.7 million for the ballistic missile defense system (Center on Arms Control and Nuclear Proliferation). That same money could pay for 27,547 people to get health care (Centers for Medicare and Medicaid Data Compendium) or, 37,384 scholarships for university students (National Center for Education Statistics). These represent real choices that the government must make with our Tax dollars. The opportunity costs in this case depend upon what you value more military spending, health care, or college scholarships.

To get a graphical representation of how an economy makes decisions on what to produce, or spend their money on, we will use a Production Possibilities Curve.

Production Possibilities Curve shows the choices a country can make with respect to its available resources.

Resources are Land, Labor, and Capital

Land– this refers to all natural resources used to produce goods and services. This includes crops that are grown on a land, minerals that are mined from land and rent that is paid to an owner of land for its use.

Goods and services are the things that we buy like mp3 players or hair cuts. A good is a physical thing you can hold a service is some thing that gets used up right after it is purchased.

Labor– this is the effort that an individual person puts into making a good or service. This for this effort the person is paid a wage. Labor includes factory workers, medical personal, and teachers. They all provide their labor for a wage.

Capital– this is anything that is used to produce other goods and services. If you make cars you need machines to make the metal that is used in the cars. It is also the truck that drives the cars to the dealer who sells them, and it is the building that the cars are made in. All of these are the resource known as capital. 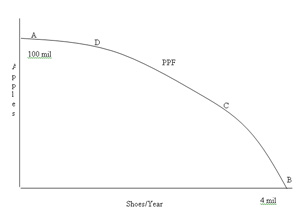 What about point D on the curve? At point D Appleoplios can produce 80 million apples and 2 million shoes. What is the opportunity cost in terms of shoes? How many shoes did they give up in order to make 80 million apples? They gave up 2 million shoes. So using all the available resources the country of Appleoplios has a variety of production choices. When the produce on the production possibilities curve they are using all of their resources to there maximum potential. This is their most efficient point. 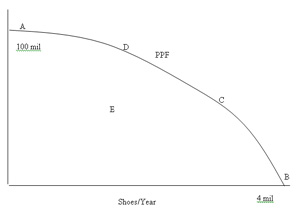 What about some other possible points for consideration? Can they, for example produce at point E? Yes they can. This is a point of under utilization of resources. They are not operating at peak efficiency. Why would thy do this? If Appleoplios wants to save some resource for future use then they would produce at a point inside their PPF. Maybe they want to save water or another resource to use at a later date. 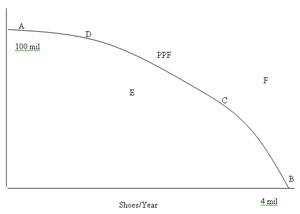 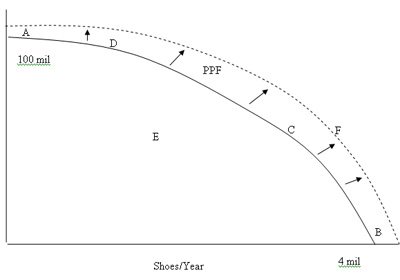 This is a new PPF that is achieved with the introduction of new resources or a new technology that can help the production process.